Every few days, my boyfriend’s housemates come home to a strange sight. Nearly all of them know me from before I started dating The Boy, but even the one that’s been my friend since elementary school can be thrown off by my antics now and then. Because every once in a while, they find me on their porch, playing music to a plant.

The music part is because of an episode of Mythbusters, where they proved the plausibility of plants growing better due to music or talking. On the show, the plants that got the heavy metal music grew the best. But I don’t have much heavy metal, so I just play the plant some Steve Miller Band because, hey, I know I grew up better because of SMB! 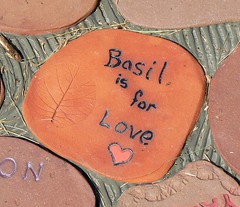 The plant is my new frugal baby. The Boy and I went to the store to get some fresh basil for a recipe, and noticed that the supermarket was selling potted basil plants for the same price as fresh cut basil! So we bought the little plant, and nearly killed it. My thumb is not as green as my mother’s, and we put off getting a pot for it and planting it properly for a few weeks.

But finally we got a pot, used some soil that was sitting in his shed, and now the basil plant is big, bushy, and smells delicious. The only thing is… we have yet to cut off any of the leaves and use them for a recipe! There’s a lesson in this, I’m sure — if you’re going to plant your own herbs, start with the ones you use the most!

I have a feeling this might get out of control — last night The Boy looked at me and said we should get a mint plant – so that we can chew on the leaves! I don’t mind getting Little Basil a friend or two, but in order for this to actually be a money-saving thing, we have to make sure that they’re the herbs we find ourselves actually using.

Many other bloggers have picked up the trowel, as well: PaidTwice is experimenting with tomatoes and my fellow Rochesterians at Spilling Buckets are growing buckets of plants!

Point of interest: I’m not a diehard believer that playing Steve Miller Band for my basil plant will do anything for it – it’s just an excuse to be wacky!