April showers bring May…. more showers. I’m pretty sure that’s how the saying goes, at least according to the weather in Northern Virginia so far. The constant rain has been sort of a doozy, which ties in nicely to this month’s net worth & financial update… 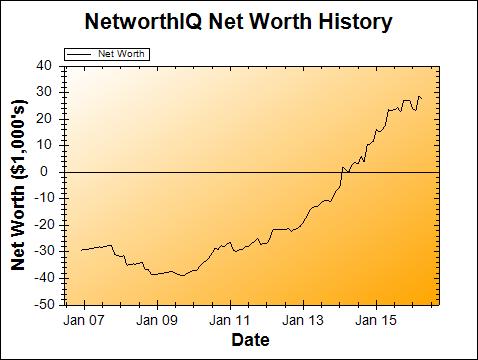 Alright, so it’s down. Let’s dig a bit into what happened in April:

April is tax month! Even though I completed our tax return back in, what, February? (I don’t even remember now, it’s been that long.) But we owed money, to the tune of over $6,000 (yay self-employment for two people!), and of course, I put off that withdrawal from our account pretty much as long as possible. So the IRS took their payment in early April. And then, we also paid estimated taxes for Quarter-1 2016, since those were due in April as well. Double whammy. But that lowered my “tax liability” in the liabilities column, so the whole thing was actually a wash. Neither up nor down in that category – as it should be.

For no reason! Well, not no reason, I suspect, but for no clear reason. My Toyota Camry passed 100,000 miles, but that was a few months ago and not in April, so it (probably) wasn’t that. As far as I can tell, the Camry just goes through seasons where Kelly Blue Book values it more or less than it did before. It may bounce back later in the year. Or it might not. I’m not really worried about it – after all, I’m about to pay off the car in a few months, so it having any amount of value left in it is just gravy. I’m not looking to sell the Camry anytime soon, so its value is more just a good way to keep track of value vs. loan, and that loan is almost gone!

If you were to ignore the car value change, I would actually be up $600 for the month, so… I’m not losing any sleep whatsoever on this month’s net worth loss. When it’s based on something completely out of my control, it’s not worth dwelling on.

Bun in the oven

Since it’s more than likely that this will have financial implications for the rest of my life, it’s hard to talk about any of my personal finances without making this announcement: I’m pregnant. Due in November. We won’t be finding out the sex of the baby beforehand. (There, I think I’ve covered the most Frequently Asked Questions.)

The long-term implications will of course unfold over time, but in the near-term, this has meant many more doctor visits than I was making previously, a lot of which has been (surprisingly) covered by my very-bottom-tier Obamacare insurance. I’ve had to shell some amount out-of-pocket, but it’s been fairly low amounts. I assume the bill for the delivery will quite large, but I’ve got several months and a Health Savings Account (HSA) to help with that.

The other effect is that we’ve started looking for a bigger apartment to rent. Running the New York Times Buy vs. Rent calculator (as I always do when the question of moving comes up) on some properties in our area that would fit our needs, it comes out that if we can “rent a similar home for less than $1614/month, then renting is better.” There are some 2-bedroom condos and townhouses in our area for that rate, so as usual, we’re leaning strongly toward continuing to rent. But for this round of rental hunting, time is on our side. We don’t need a bigger place until the baby is about 6 months old or so (it would be hard to feed a kid at a high chair in our current kitchen/dining room area), so we’ve got a full year to find a place and move. Plus, our current lease is now month-to-month, so we have the flexibility to jump on a place if it’s a great deal, and pass on anything that isn’t.

The bad news? Paying for a bigger place will probably knock out the extra $194/month that I’ll be freeing up when I pay off my car in July. As far as we can tell, that will go straight into the rent on the next place. So we’ll be able to pocket that money for a few months, and then it’ll be rolled into the new higher rent of a bigger place when, well, we find a bigger place.

The poll for how I should divvy up my car payment money (once the car is paid off in July) is still open, though because of the above-mentioned larger apartment search, it seems less relevant now. But just for fun, here it is again:

And that’s all she wrote! We really need to get our super-patriotic decorations up on the Holiday Tree before Memorial Day, but as we haven’t done it yet, I haven’t got any photos to share with you. Next month!