You are here: Home / Free Stuff / Financial News on Twitter

The following is a guest post from Lewis Bennett, who is interested in anything financial. He writes for a Life Insurance website based in the United Kingdom.

Twitter mania is in full force. The micro blogging and social networking site is being used by everyone from President Obama and Britney Spears to the average person on the street. 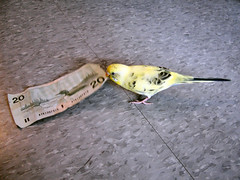 The service is free to use over the web and allows users to send 140 character text-based updates, known as tweets. Users can send and receive these updates via the Twitter website, or through a number of other applications.

Financial news companies have seen the potential and have been using Twitter to help give their readers immediate access to their newsrooms. The following websites have taken the lead:

Many of these pages also feature sub-feeds relating to other areas of news and finance.

If you like to keep current on business news then Twitter is a quick and easy way to view everything going on around the world in real time. Happy tweeting!

Stephanie’s Note: In addition to big-name financial news networks, you can also find some of your favorite personal finance bloggers on Twitter. For example, my own tweets can be found at http://twitter.com/stephonee.