I just flew in from Rochester, and boy, are my arms tired! Actually, my everything is tired. The NASA Tweetup for the shuttle launch finally happened, but the shuttle launch itself didn’t. And I jet-setted all around the East Coast to be there and get to a wedding back home… but I haven’t got a single regret in the whole thing.

Sure, I’ll tell you more about that. But first, the numbers! 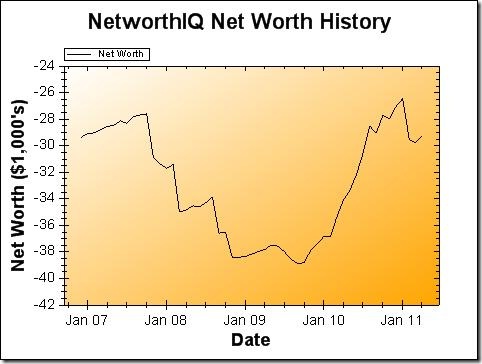 Whoa… not bad at all! Especially considering the crazy travels of the past week! I left for Orlando on Wednesday night, spent two and a half nights in a group rental house near Kennedy Space Center, caught a 6am flight up to Rochester, saw my parents briefly, attended a wedding, visited with local Geocachers for breakfast (tradition!) and then took a final flight back to DC to collapse into bed on Sunday.

With all that going on, I really expected a “down” month, net worth wise, and was prepared to be okay with a down month! But my new pay rate kicked in and a three-week paycheck at the same time didn’t hurt at all, so things balanced out in my favor in the end.

Let’s take a moment to look at what else happened, besides my crazy long weekend at the end of the month:

Taxes: April the taxman cometh! Both my federal and state direct payments were scheduled for April, so my “Cash” assets dropped like a stone, by more than $3,100 this month. That’s okay! My tax liability dropped by more than $3,200 because of those payments, so I actually got another little tax refund of $100 or so there, didn’t I? Woot woot!

New Savings Snowball: Last month I implemented an updated version of my savings strategy, and after my end-of-month payments, you can already start to see progress over last month’s snowball:

I was able to drop a whopping $500 extra into my Future Car Fund, despite all the craziness! So that goal is hopping right along — I can’t promise $550 jumps every month, but it was a real kickstart for the new plan, anyway! My travel fund dropped to $0 for very obvious reasons, and probably won’t recover at all next month due to the rescheduling of the shuttle launch.

If you’re not following me on Twitter, I should quickly explain that last bit. The NASA Tweetup was great: it was two days of tours and amazing speakers that was worth it all on its own. Four former astronauts, several amazing scientists, engineers, and support staff from NASA and other agencies took their time to talk to the 150 of us and show us, up close, things that the rest of the public never really gets to see.

It was very once-in-a-lifetimey, but at the last minute, literally as the shuttle astronauts were driving past us in the astrovan out to the launch pad, the launch had to be “scrubbed” due to a failed Auxiliary Power Unit. There was heartbreak, especially for the people who traveled in from places like the UK or Australia, but mostly, there was understanding. Understanding that NASA is not going to unnecessarily risk the astronauts’ lives. Understanding that they’re not going to fly any ship before she’s ready. And understanding that this launch isn’t for us; it’s for the good of science, the nation, and the world.

Plus, a lot of us are so totally planning to go back for the launch when it happens, anyway.

If you have any questions about my net worth or how it is calculated, feel free to ask them in the comments.