Well, I up and disappeared for nearly a month again. I probably should have known that doing some travel the last weekend of the month would throw everything off kilter, but I didn’t realize how much off things would get. And, to be honest, maybe I didn’t want to write about this month any sooner than I had to? I mean… 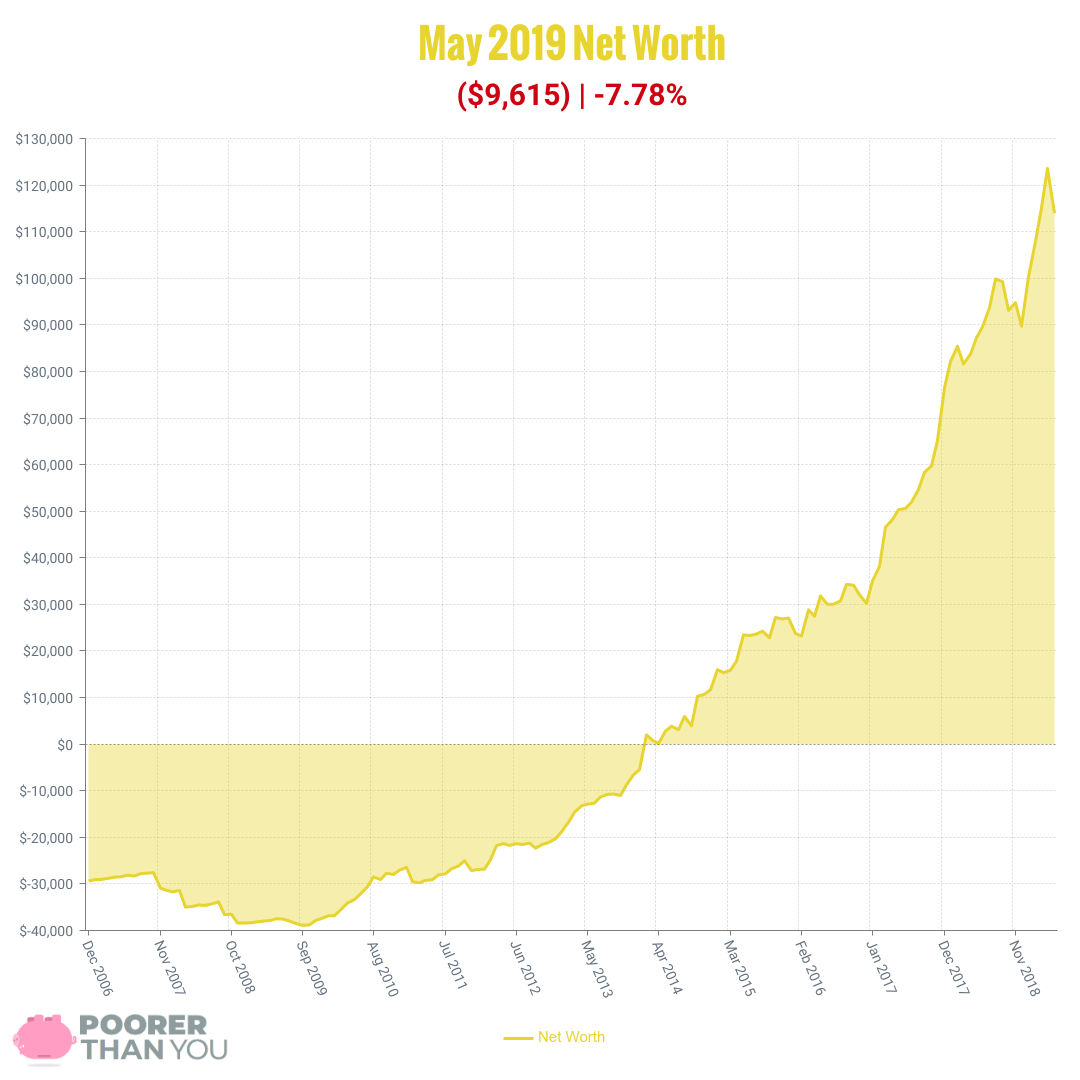 Okay, okay, it’s not that bad. All things considered, I’m actually quite pleased with the month of May. It’s just hard to speak nicely of a nearly-8-percent drop! Here’s what happened:

Soooo many things moved around in the “Cash” category this month. The most important bit by far is that I dropped $5,413 on a credit card for my braces. These shiny, painful hunks of metal in my mouth are now my lifetime second-largest purchase, after my shiny silver Camry. (Apparently, I buy expensive silver things. Who knew?)

But, the month was not down by over $5,000, despite the ginormous purchase. A good chunk of it was paid just from paychecks, but that wasn’t all of it (especially because we had some sickness run through the household in the middle of the month, and actually worked less than usual, urgh). Another big chunk of the blow was cushioned because I opened up two more new credit cards, and managed to hit the minimum spend on each of them for big fat bonuses of $958 for the month. Woohoo!

One of those new credit cards had a 0% interest, $0 fee balance transfer offer and 0% interest on new purchases for 12 months… but we’ll come back to that in the “credit cards” category.

This is where my net worth really took the beating in May. But, although it certainly isn’t joyful to look at, it really doesn’t bother me much. Just like I can’t take much credit when there’s a big increase due to market movement, I also can’t feel too bad when there’s a big drop for the same reason.

Market’s gonna do what the market’s gonna do. I’m just along for the ride, aside from contributing when I can. This month, no contributions above the usual amount into the HSA from my paychecks. It’s alright – I’ll get back to my retirement accounts when we’re done buying shiny hardware for inside our mouths!

The fact that I still track my car’s value makes me wonder if I should track the value of my braces, too! Of course, they have no resale value at all, so I guess they would just show as “-$5,413” this month and then $0 for the rest of time. Ha!

I continue to pull my money out of Lending Club. I also cashed some checks that were in here as “uncashed checks.” Exciting! Those moved into “Cash,” as you might imagine.

Another “double” month, since the month before the payment didn’t hit in time for the net worth update, so this is April and May’s principal payments combined. I’ll be continuing to just auto-pay the minimum on this until retirement accounts are maxed out for the year.

Yup, I increased my credit card debt this month. As I mentioned above in “Cash,” I had opened a couple of new credit cards for the spending bonuses on my braces. One of them also came with a sweet 0% interest balance transfer offer, with no fee. So I gladly transferred as much as it would let me ($5,000) and also put all of my other regular spending for the month on the card at 0%, until I hit the bonus threshold.

So the credit card balance for this month should have been up by nearly $7,000, but it wasn’t. That’s because the $5,000 I transferred was from my existing (and soon expiring) 0% interest credit card, from last year when I transferred a big chunk of my student loan to a credit card. I then used half of the cash I had saved up to pay off that card to pay the new card with the braces bill on it.

If this sounds like a big old shell game, it really is! I shuffled from card to card, to get as much as possible at 0% for as long into the future as possible. I already have the cash to pay it off, so it’s just a matter of maximizing the interest I earn on that cash in the meantime. More on that next month.

I simplified what goes into this category a bit, since it was starting to get unwieldy. I stopped counting my mounting life insurance and car insurance “debts” (the monthly increase towards what I pay every 6 or 12 months), and to balance it, I stopped counting the cash saved up for those in the “Cash” category as well.

For now, this is just my tax liability for my self-employment activities (this blog, and anything else I do under my writing business).

Okay, so, you see how that wasn’t so bad after all? Sure, the numbers were down an amount that might have given me a heart attack 10 years ago, but for innocent reasons: I finally paid for the final big chunk of my much-needed dental work, and the stock market took a tumble.

It might not be pretty, but at least it’s honest.

Debt Freedom: Okay, by taking on more 0%-interest debt, I’m a bit further away from this than I was before. And boy, did I make a mess out of Undebt.it by keying in all of the balance transfers and wacky payments this month! But, I managed to set it up so that I’m still on track to be debt free by May 2024 – I just need to put $55.55 extra toward my debt every month to stay on track (on top of paying off the 0% card with the money I already have saved up to do so with, at the end of the 12-month promo period).

$200,000 in Retirement Accounts: Well, that drop in the market this month is not doing me any favors! 51 months remaining to get there “on time” (according to the arbitrary time I put on it). $88,125 to go. That’s $1727.94 per month, which feels like a bit of stretch. But HSA + IRA contribution limits add up to $1,083/month, so that’s just $645 in growth needed per month. Even with months like this one, that doesn’t seem out of the realm of probability, for the long term. Just gotta keep plugging away at those contributions when I can!

A lot of this seems incredible to me, impossible even, until I run the numbers and see how it really is doable. If you aren’t tracking your net worth regularly, it may seem impossible to you, too! But I encourage you to give it a go, just to see what’s possible.