I had been a “20-something personal finance blogger,” starting with the day I dropped out of film school at age 20 and started this blog, up until now… this will be my very first update as a “30-something personal finance blogger,” I suppose. So, let’s see what the net worth of a newly-minted 30-year-old who shares this stuff on the internet looks like: 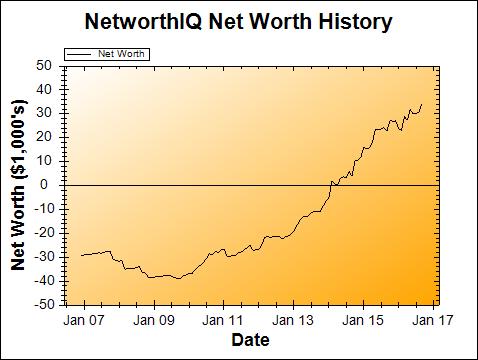 Lookin’ good, little graph! I have to say, I really love having nearly 10 years of net worth data in a handy spreadsheet-and-graph setup. Unfortunately I can’t recommend the website I use anymore, because it’s old, broken, and not maintained at all. I’ll probably be switching to Personal Capital soon, which is a free solution that all the cool kids use. (And by “kids,” you know I mean awesome people on the internet who track their net worth.)

Mint also gives you a peek into your net worth, but I don’t use that exclusively because it doesn’t capture things like my physical cash on hand, or my tax liability, which I calculate manually like a crazy person. (I do use Mint to log into 90% of my accounts to make it easier to do the manual calculation, though!) NetworthShare is yet another free online solution that was made to replace the old and broken one that I still use, but the graph is not as easily sharable as the image I get from Old-Brokey, so it’s great for tracking your net worth, but not right for me. Obviously, I’ll let you know how Personal Capital works out after I get a chance to try to out.

Yup, I fell short of the goal I set for myself to hit $38,901 in total net worth by, well, right now. As much as it doesn’t exactly feel good to fall short of a goal, I’m pretty okay with it. Here’s why:

With all the baby stuff (especially a labor-and-delivery bill that will top $4k), I can’t say I’ll hit the goal this year even… but I’m still making steady progress upward despite everything, so… whatevs.

This will be the last month of “not much to report!” I’m firmly in the third trimester (a report on second trimester total costs is coming soon, but I’ll reveal a little spoiler: it’s not much), and costs are about to start ramping up in the next few days. We recently got my husband the Discover IT credit card (referral link – if you open this card, you get a $50 cashback bonus, and so does my husband!) on the recommendation of Jim over at Wallet Hacks, because it’s paying 10% back at Amazon for the rest of the calendar year. And we are buying a significant amount of baby stuff this month (car seat, stroller, rug for the baby’s room, and all the odds and ends we didn’t receive from baby showers) from Amazon.

But all of those baby purchases will be in October, so as far as September goes, we managed yet another month with absolutely no spending on the baby. A few maternity items for me, and I took a trip up to visit my family in the north (and attend a baby shower in my honor), but we bought absolutely nothing for the baby itself during the month, which was one of our goals. Woohoo, we did it!

Somehow, it seems like I’m writing about taxes every month, which is odd, because they are quarterly estimated taxes, not monthly estimated taxes! But because the federal government and the Commonwealth of Virginia seem to be on slightly different schedules, our quarterly tax payments do actually seem to come out nearly every month at some points. September was actually a double-whammy where the two entities actually are on a similar schedule, so they were both paid in September. But hey, death and taxes, whatcha gonna do? (Hopefully avoid a big ol’ tax bill next April – that’s what!)

So September was a nice bump up (minus that tax payment), but here’s what I predict for the foreseeable future in my net worth: DOWN. Down every month, for at least the next… four months?

After that… no clue. It’s not entirely clear what our “new normal” will look like, as freelancers with a baby in our lives. But hey, it’s a new adventure – and that’s something to look forward to, even if net worth has to take a hit in the process.